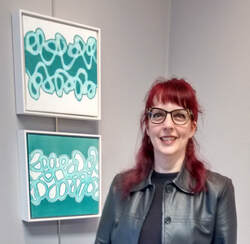 Photo courtesy of K.R. Seward
Catherine Carter combines paint, fabric and paper to explore the possibilities of line. She has a Master of Fine Arts degree in Painting from the University of Massachusetts Dartmouth, a Bachelor of Arts degree from Lesley University, and a Diploma from the School of Fashion Design in Boston. A native of Massachusetts, her studio is located at Hatch Street Studios in New Bedford.

Catherine has exhibited her paintings in museums and galleries across the United States as well as internationally, including shows at the Chrysler Museum of Art, the Marin Museum of Contemporary Art, and the U.S. Embassies in Oman and Cameroon. Her artwork is held in public, corporate, hospitality, and private collections, and has been reviewed in the Boston Globe, the Providence Journal, and Art New England. She is the recipient of artist grants from the St. Botolph Club Foundation and the Unitarian Universalist Association. 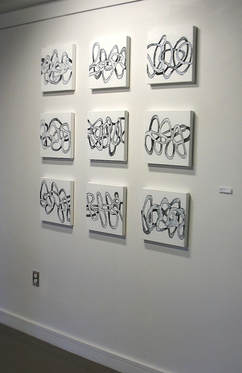 "Carter's contribution to the show is a series of paintings made from acrylic applied to sheer white fabric that's been cut up and reorganized in rows of small circles. The resulting forms, although from a single cloth, become their own unique compositions, existing next to one another like small globes exploded from the same star." Liz Lee, Art New England, March/April 2018

"Catherine Carter’s 'Crimson Cursive' is a delightful rethinking of the elements of calligraphy as they morph into the movements of choreography. Over a red velvet hue and a subdued pink, Carter applies a squiggle of stark white, looping about like the icing on a Hostess cupcake. The painted fabric and paper collage is sumptuous." Don Wilkinson, New Bedford Standard-Times, 12/14/17

"By her own admission, Catherine Carter's rhythmic squiggles take their inspiration from nature, from branches and spider webs, roots and vines. They are well made, with a wonderful sense of line that Carter suggests blends calligraphic forms and gestural drawing. Carter squirts paint from squeeze bottles onto the paper, and in some cases blots it to soften the edges and create crinkled surfaces that look like they were made by a kiss." Channing Gray, Providence Journal, 8/17/16

“The essential images in Catherine Carter’s paintings resemble a mix between loops of Silly String and hieroglyphs from an ancient language. When viewed from the simplest on two square canvases to the most complex on nine smaller panels, the paintings become more dynamic like the pulsing waves in a heart monitor. In her two-canvas ‘Scrawl,’ Carter’s horizontal lines appear steady and regular like an easily untangled shoelace. In the five vertical canvases titled ‘Suspense,’ her lines have gathered knots at the top and bottom as if in the process of being stretched out. But in the nine smaller square panels titled ‘Shorthand,’ Carter’s lines are busier, almost frenetic, as if her hand couldn’t resist its own energy.” Chris Bergeron, Metrowest Daily News, 9/22/13

“Carter's black and white paintings take the impact of type on paper (or computer screen) -- the stark contrast of dark against light, arranged with implied meaning in orderly rows -- and liberates it, allowing black lines to dance over white surfaces and white lines to twirl in rhythmic patterns against black backgrounds.” Barbara Rizza Mellin, The Middlesex Beat, May 2004

“The paintings pop off the wall, thanks to the sheer tension of her gestures … Many of the 'Coil' paintings bring to mind the joyful wagging of a dog's tail. Two larger works, 'Curve' and 'Swirl,' sport colliding loop-the-loops, like a slinky gone horribly awry. … The white-on-black pieces are sexier, provoking an Op Art kind of retinal buzz. But the black-on-white paintings are more satisfying: The white veils but does not hide dark gestures just beneath the surface, which suggest shadows, depth, and inner turmoil. So 'Curve' shows those aggressive, black curlicues careening over the canvas as white hazes over their sharp edges and obscures occasional lines, imbuing the painting with spaciousness.” Cate McQuaid, The Boston Globe, 12/19/03

“Patterning and technique are consistent, but the paintings vary widely in tone. 'Bouquet' starts with a spray-painted pattern of plum-toned rings with pale veins. Carter cut her fabric into rough Xs and pasted them in a diagonal grid on the white-painted canvas, so white squares dapple the surface in a moody checkerboard. Ethereal purple rings play tag with the squares, shifting from foreground to background, making a pleasing counterpoint between solidity and haze, reality and imagination. … ‘Hook' features a pattern of two hooks looping away from each other, white on a black ground, repeated in horizontal stripes across the canvas. They could be handcuffs, eyeglasses, breasts – whatever they are, they're disturbing, even harsh. Carter's formula for making art generates work both pleasing and harrowing, and that's good.” Cate McQuaid, The Boston Globe, 12/22/01

As an artist, I am a lover of line. Lines hold for me many deeply rooted personal associations. I enjoyed exploring the natural world as a child, so my lines echo the intricacy of branches, spider webs, roots, and vines. I studied dance in my teens, so my lines trace the pathways of the human form whirling through open space. My working career began in the fashion industry, so my lines mimic the twisting and looping fibers of fabric weaves. I am a writer as well as an artist, so my lines transcribe the patterns of hand-written calligraphy and printed text.

The lines in my paintings combine all of these influences, experiences, and interests to describe a sense of joyful motion and cyclical energy. They tell a story – not a clear-cut narrative, but the suggestion of ever-unfolding change through alternating tension and release. They celebrate the rhythms of life.

To create these works, I use fluid acrylic paint, extruded from squeeze bottles, in a motion that unites calligraphic form with gestural drawing. I then lay a sheet of paper over the squirted marks and run over it with a brayer, so that the lines are flattened, making them wider and softer. Sometimes I collage layers of paper or fabric that have also been covered with lines onto the painting’s surface to extend the impression of dimension. Thus my work incorporates the processes of drawing, painting, printmaking, and collage.​